You guys who setup ladder stands on management land during the hunting season, do you mind someone using them when your not in the woods?

If a hunter is in your stand before you, what do you expect them to do, if and when you show up? 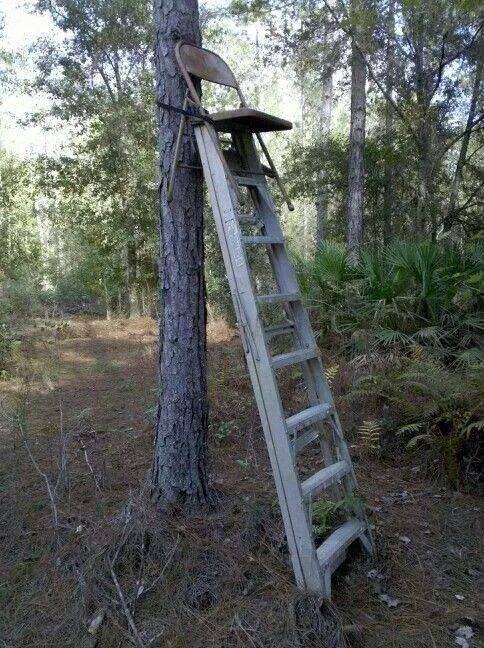 damn brother talk about home made lmfao but whatever gets him in the woods.

y all besafe
Melbourne Mud Mafia Down And Dirty
Top

I always make mine a booby trap as a backup in case the I E D doesn't go off!!
Top

That ladder probably cost more than a real tree stand.

Now, knowing this is public land, and you find someone beat you to the area you thought you claimed and you are a prick about it... Are they really the problem or are you?

Just to help everybody visualize the problem, let's remove the guns and deer. Let's visualize this same phenomenon on any other piece of public land... Like a park. (FYI for the slow ones in the audience: this is called an analogy) Im gonna go to the park and tie some flagging tape to the swing set, then show up 2 weeks later when my grand kids are in town to find some other kids are already there so I start runnin my mouth and telling them to leave because I clearly flagged that spot already. Are they the problem or am I?

How about if I set up some soccer goals in the field at that park. Then show up a couple weeks later with my kid and her friends to find some other kids in the middle of a game. If tell them to stop playing and leave because those are my goals, are they the problem or am I?

I won't get into the issue of one person leaving multiple stands and flagging several areas. If you don't see the problem, you are the problem!

I have another analogy for ya... Public fishing spots, lets say in the ocean. Kinda like the public hunting woods. Nobody there owns the spot and they all think it's their honey hole just to find another boat there or hunter in area when they arrive second. If you were not there first you need to head to plan b. If plan b has a visitor already you need to get out there earlier. The hard part is when you are there first and the jackazz shows up after you and starts in calming you stole his spot. It's first come first serve and if he hangs around it really causes everyone to lose. People suck. Nice to run across some rare folks who are respectful now and again

I think the first one at the spot on any given day gets the spot provided they have their own stand. Sometimes it is a lot of work to get a stand to a location leagaly and you should have your own and respect other peoples personal property(You don't sit on someone elses car in a public parking lot do you because they parked their car in that spot before you? ) Having your own stand does not include stealing a stand and moving it to where you want to sit. If you want to hunt a prticular tree get you stand there the earliest you are leagaly aloud to. If someone puts a stand in early or leaves it year roud it is fair game to who ever gets there first on that day.
Top
Post Reply
7 posts • Page 1 of 1