Slidin Gator Thanks for the link. I hope that a generic pump meeting the pressure and volume requirements with a pressure regulator and return line will work so I don't have to mod my existing fuel tank for a specific in-tank GM unit.
Top

You can remove the FPCM from the tune all together, just make sure the fuel pressure sensor is wired to the ECM correctly and in the regulated supply line to the High Pressure Cam Driven Pump. LHU fuel systems are direct injected so there are some extra steps that need to be made to assure there is no air in the HP rail which operates about 1300psi.

If you are going LTG I would recommend buying a harness from a manual car and get a used ECM... spend $20 ang GM Connect for the wiring diagrams and splice and solder as needed to wire the motor. Takes some time but cheaper than buying the crate motor wiring.

If you want plug and chug buy the crate motor stuff, you will likely still need to splice into the VSS signal to get it to work properly. There are lots of tricks to these motors to get them to work.

When I get my boat back in hand after some re-work Ill bring it over for a ride and talk to you about options with Ecotecs. I am in Lake Charles and we spoke on Facebook. I have just been busy and we had a plane crash in out marsh that Saturday when you messaged me so I was checking in on friends that were out there to see if they needed assistance.
12x7'6" American Airboat
1.4L GM Ecotec - BNR GTX250 Turbo
2:1 Century Ecotec Drive
2-bld Whisper Tip 72
"Nothin' as Fine as Hearing a Turbo Whine"
Top

Well, Looks Like I'm going down the LTG Road. It may be here by the end of the week. Besides the GM Performance option that's out there I spoke to Swap Specialties and Performance. They were very helpful and my first impressions are they would be good to work with. I will try to find some reviews on them. Did not get to talk to CBM but I saw here someone has used those guys and saw some good reviews on some automotive forums about them supplying harness and ECU for LTG'S. If I get real energetic and want to delay my project a few months I might try to put a harness together myself

I'v got a buddy that is a master welder when it comes to stainless so my engine stand work has a big check mark on it.

If I have to deal with the VSS signal as you guys have pointed out Dakota Digital has a solution for that. The guy with Swap Specialties said he can take care of that If I get the harness and ECU from him.

I think I can get an exhaust flange for the turbo from zzperformance if there is anything special about it. If its just a flat mating surface we can take care of that in the shop.

Need to work out a plan for gauges.

BR,LC,LA no worries I know were all too damn busy now a days. Sorry to hear about the plane crash hope everyone is ok. Are you running the small century belt drive? And if so what do you think about it? I was considering it but I don't know if its strong enough for the LTG.

Do give me a buzz when you get running. I've got access to a few thousand acres of cypress swamp we can legally run and a lot of small waterways by my camp.
Top

Anyone use the Auto Meter DASHLINK? Looks pretty interesting as a phone or pad based gauge cluster. Lots of info can be displayed.

So gauges for the LTG.

What then becomes the next most important that I would want on the console?

I don't want 27 gauges to keep track of Just looking for opinions as to what would be the best 4th or 5th gauge you would install that would give you good data to help avoid an engine failure. Info that would point out a problem that water temp or oil pressure would not.

And I'm still looking to see what gauges are compatible.
Top

Anyone have luck with getting in touch with ballistic lately? I would really like to consider their gearbox but can’t get anyone on the phone.
Top

Ballistic is the only option for LTG unless you build adapters. LTG bellhousing pattern is different from other Ecotecs. Need to get a sealed gauge panel box such as a nema enclosure and run a Banks 1.8 IDash off the OBDII
12x7'6" American Airboat
1.4L GM Ecotec - BNR GTX250 Turbo
2:1 Century Ecotec Drive
2-bld Whisper Tip 72
"Nothin' as Fine as Hearing a Turbo Whine"
Top

I read a few places that the bellhousing pattern was the same as the previous LNF and LHU. Are you certain of that?

Motor will be here tomorrow so I will try to find a shop drawing or some pics of the LNF or LHU to compare.

That is a sweet little gauge thanks for the lead. Is that what you are using on the 1.4?
Top 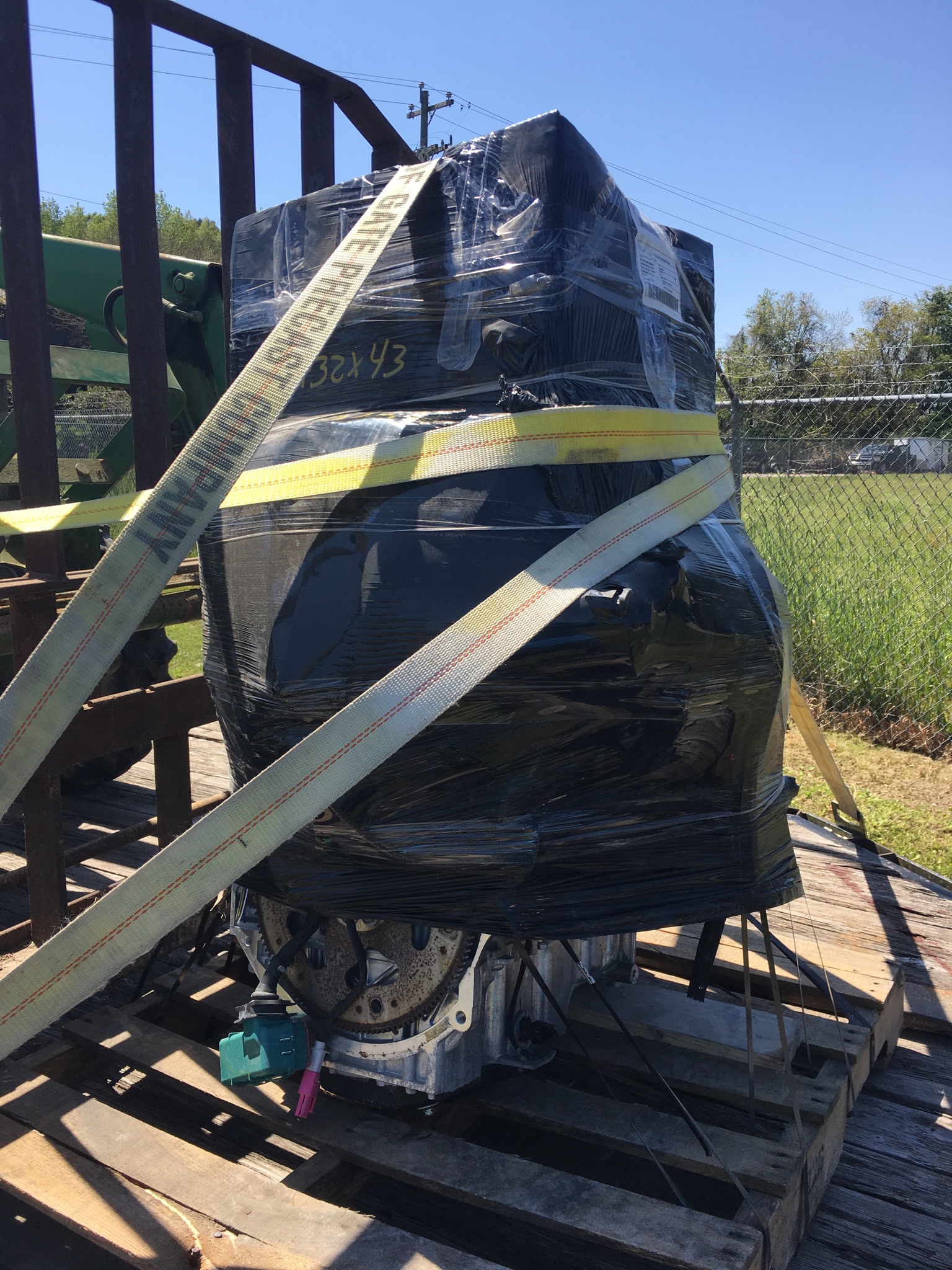 THE EAGLE HAS LANDED
Top 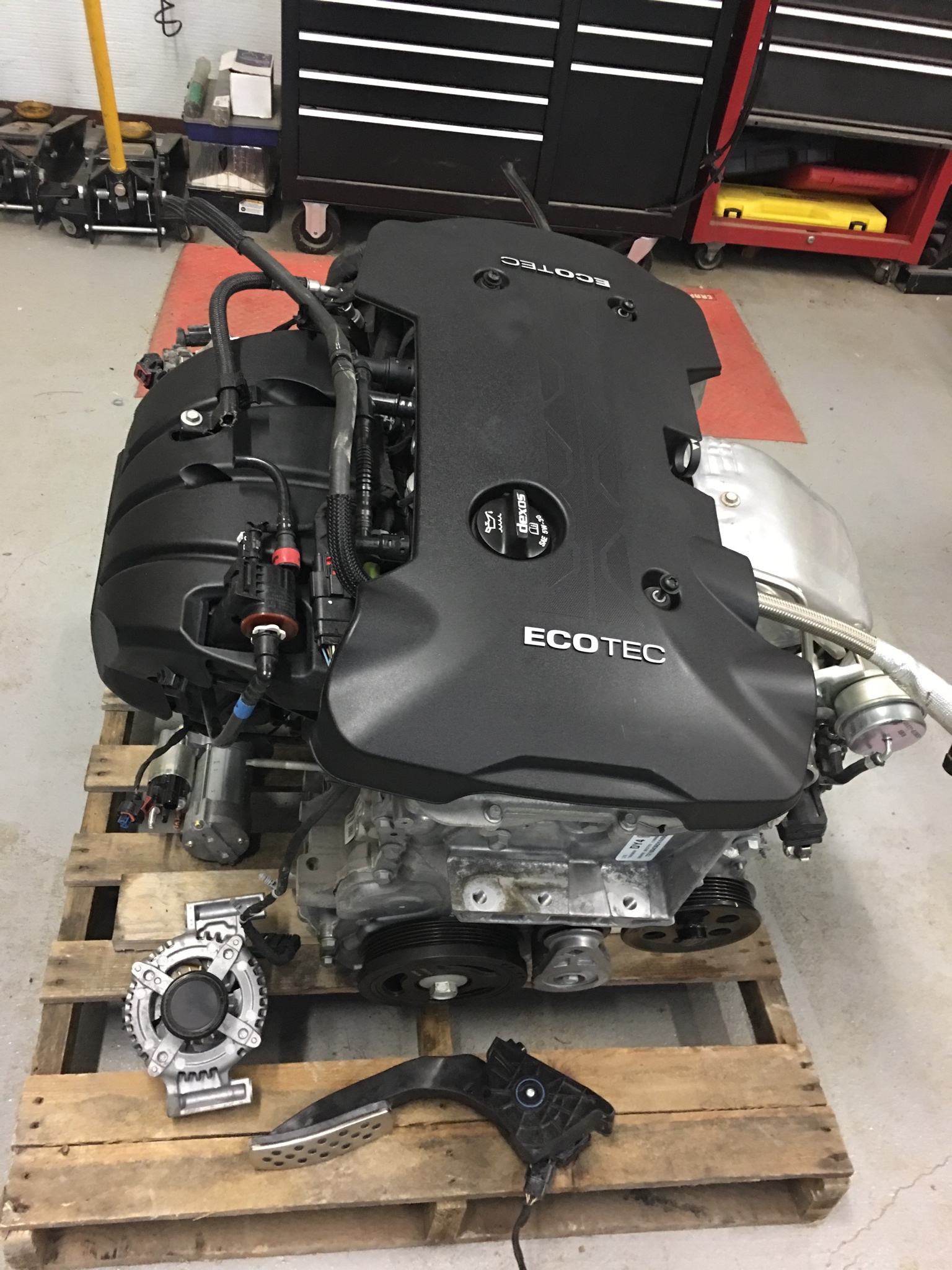 Found this in a post from chuck. Looks like the bolt pattern between the LTG and LNF/LHU/LDK is different. I saw in some old post from JB550 he had a LTG with a ballistic box. Did ballistic make two different bolt patterns for the ecotecs? both the LTG and LHU? Or did they just make the box for the LTG.

The older engine/transmission bolt patterns are not the same as the newer ones for the 6 speed and 8 speed transmissions. Like the LNF/LHU/LDK is the same on the 06 to 2013 and can fit the 6 speed autotrans. The 2013/2015 LTG has a diff bolt pattern and is for the 8 speed autotran. The LFX 3.6L V6 may be the same bolt pattern as the LNF/LHU/LDK, I don't know, I haven't checked. I do know the new Twin Turbo 3.6L V6 is an all new casting and is coupled to the new 8 speed auto transmission. So I don't think the Transmission bolt pattern is the same. I have been looking for one in a wreaked car for about a year. I guess the people that own them are safe drivers.
I know a boat with the LFX 3.6L V6 can be built for a minimum of 3000.00 dollars less than the turbo Ecotecs. Just haven't had anyone ask for one. I don't think the HP rating at high rpm's has much to do with a VVT engine that brings in high torque at low rpm's. That is why the small Ecotec engines can turn such large props. That is just what an airboat needs, high torque at low rpm's.
David Wine is looking for the bolt pattern for the Twin Turbo V6.
Thanks, Chuck
Top

Well, found the answer a little further down.

David - I think the trouble you will have with a multi-fit universal bellhousing is that the starter locations are different on the (2), what I'll call "old" and "new" Ecotec motors which is why we decided to make 2 separate bellhousing but use the same gearcase.

Chuck - Here's a link to a low-milage LFX out of California. http://www.lkqonline.com/partdetail/~98 ... tmentempty. It's the highest HP and TQ out of the group of engines as well. Maybe you and David can pick this engine up and knock out that belt drive setup. Be a cool setup I'm sure and would look nice infront of the direct fit gearbox when we make one

The motor exterior is in great shape. I went thru the process of identifying the threads on the bosses that I will need to use. Trans mounting points, lifting points, and motor mount candidates. I was able to run my tap thru by hand with some lubricant to the bottom of most holes.

There are two different sizes on the front side of the block on this motor where you would typically put an engine mount. M8X1.25 and M10X1.5.

Here are the candidates for front motor mounts. 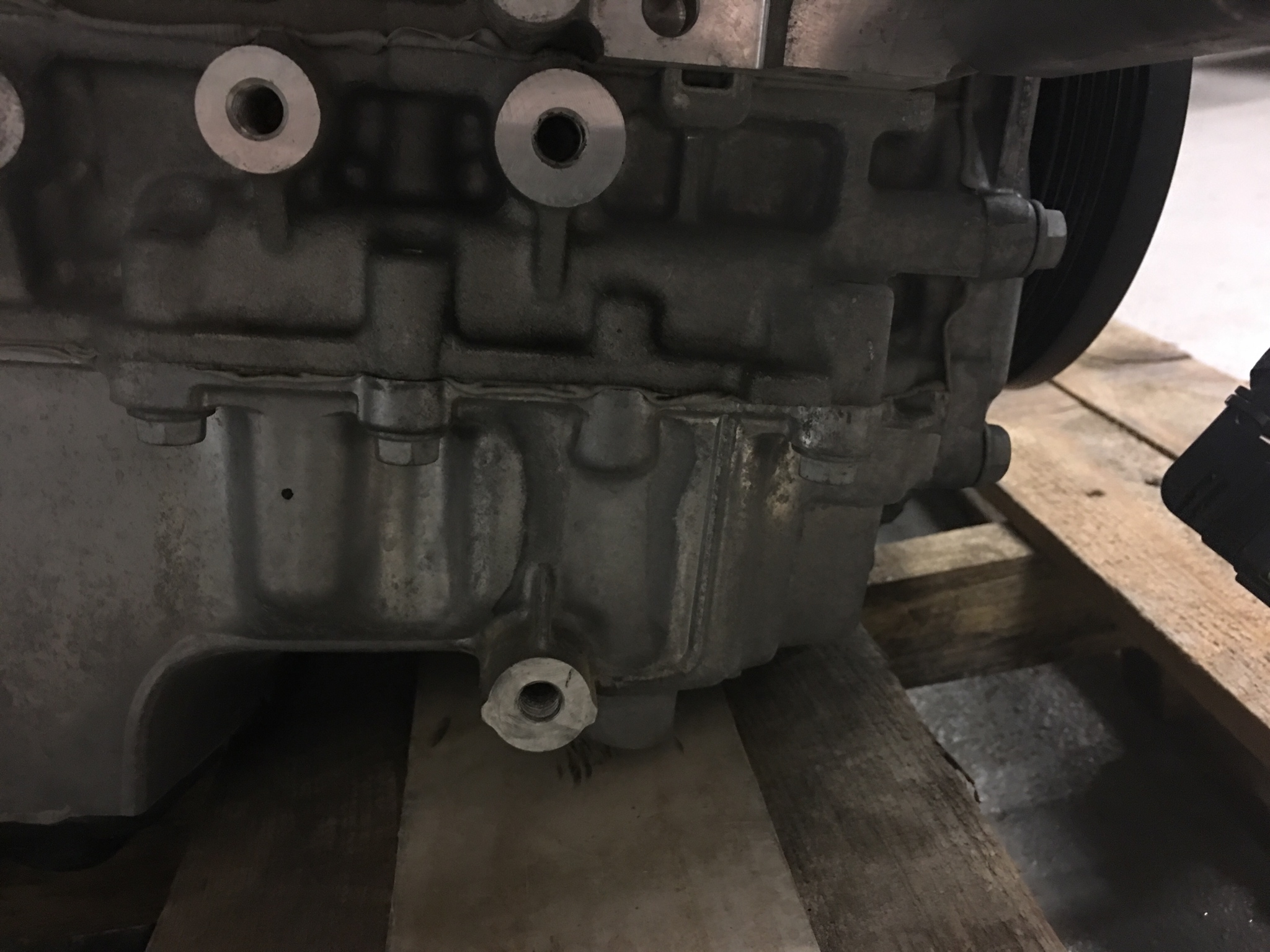 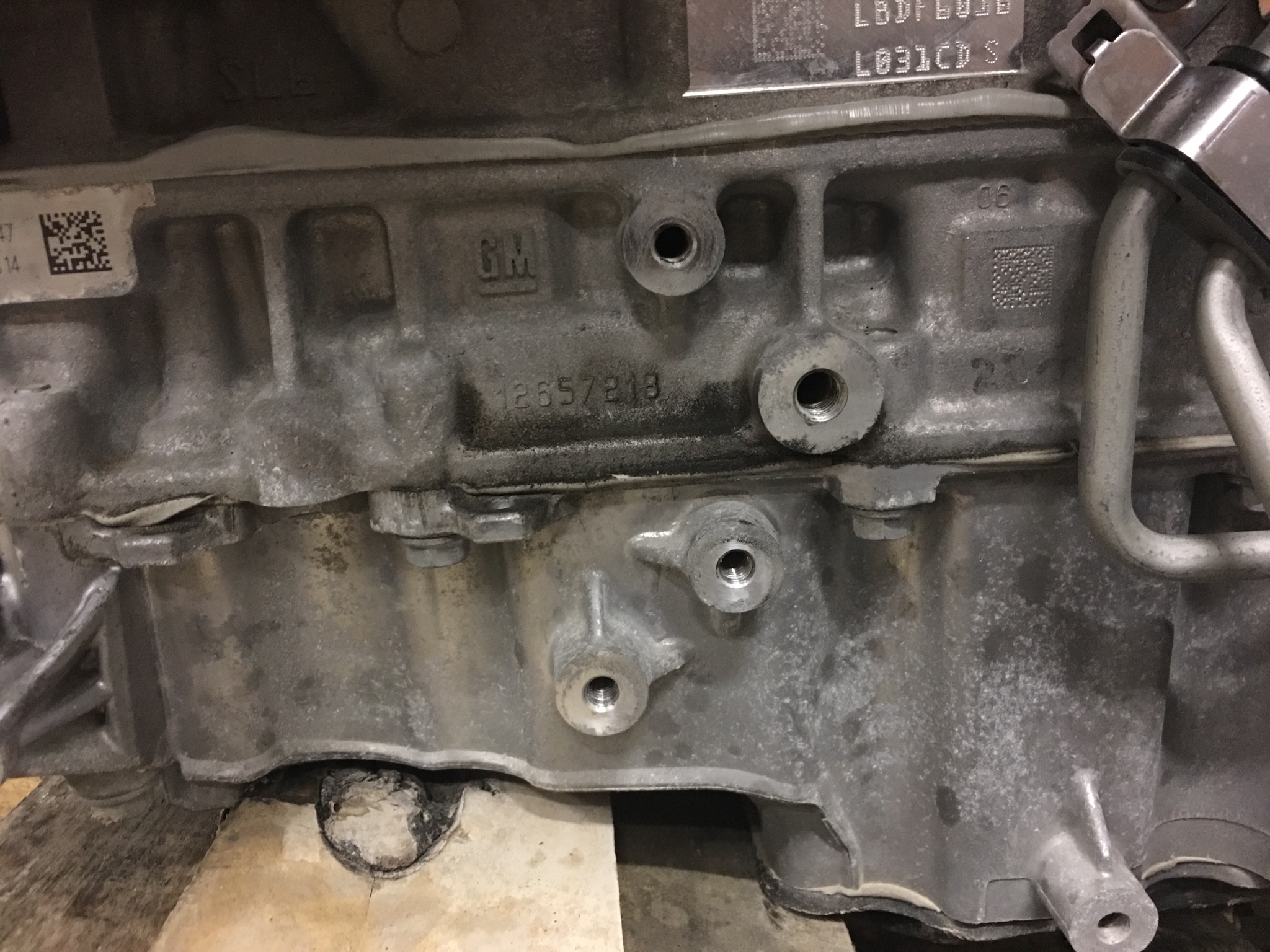 This motor was in a front wheel drive car. There is a heavy duty mounting flange along the front near the top where this motor was mounted in the Malibu. Looks pretty stout. I may try to incorporate that flange into the engine stand. 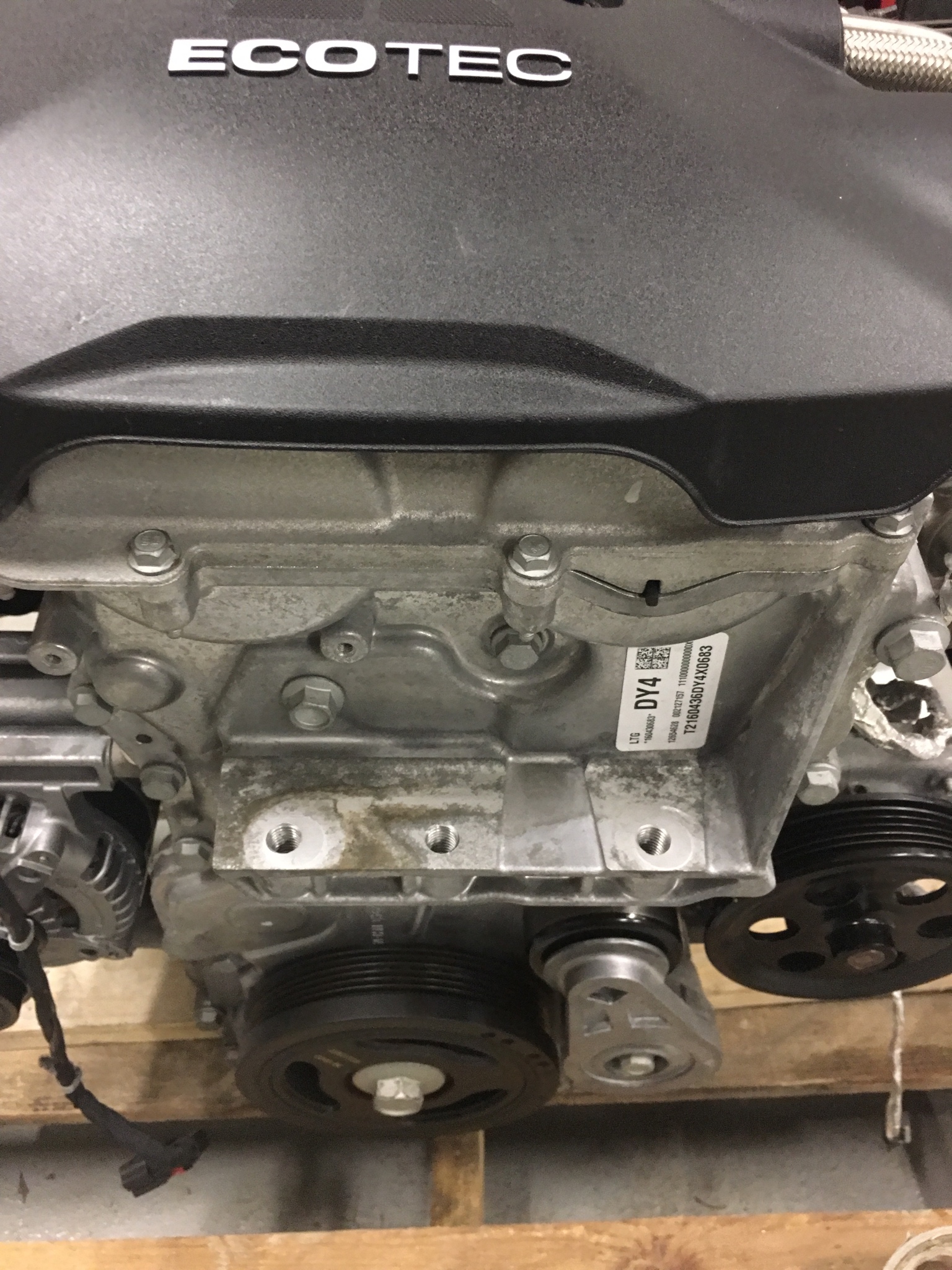 Anyone have recommendations on engine mounts? I have found everything under the sun while looking. I know I'm going to want some vibration dampening but also know that too much movement has to be real bad

Some of the mounts I have seen scare me. Automotive engine mounts tied into a big squishy home grown looking mount.......then connected to the engine stand.
Last edited by FISHSTICKER on Sat Mar 23, 2019 8:33 am, edited 1 time in total.
Top

I spoke to Andrew at Water Walker Props. Super nice and VERY helpful. He even offered to help me get some resolution to my reduction drive issue. After speaking with Andrew I'm going to take his recommendation and go with the 73 or 74" (cage limited) Maximus 3 blade.

If you were going to build your own adapter what gear box do you think would be the easiest to adapt? Here is my flex plate. 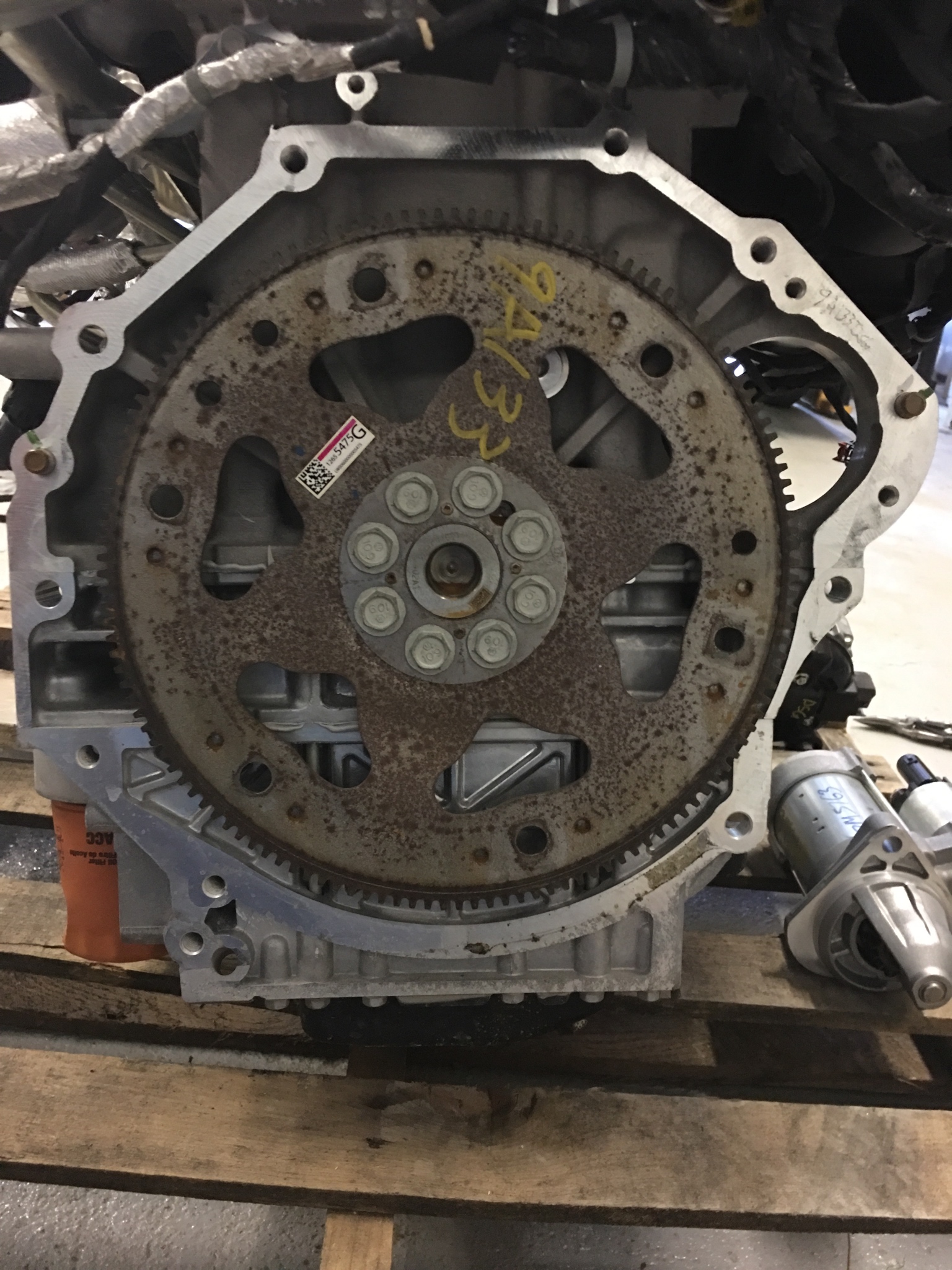 The Lobell Boys got it done! Great weekend with some good kids. 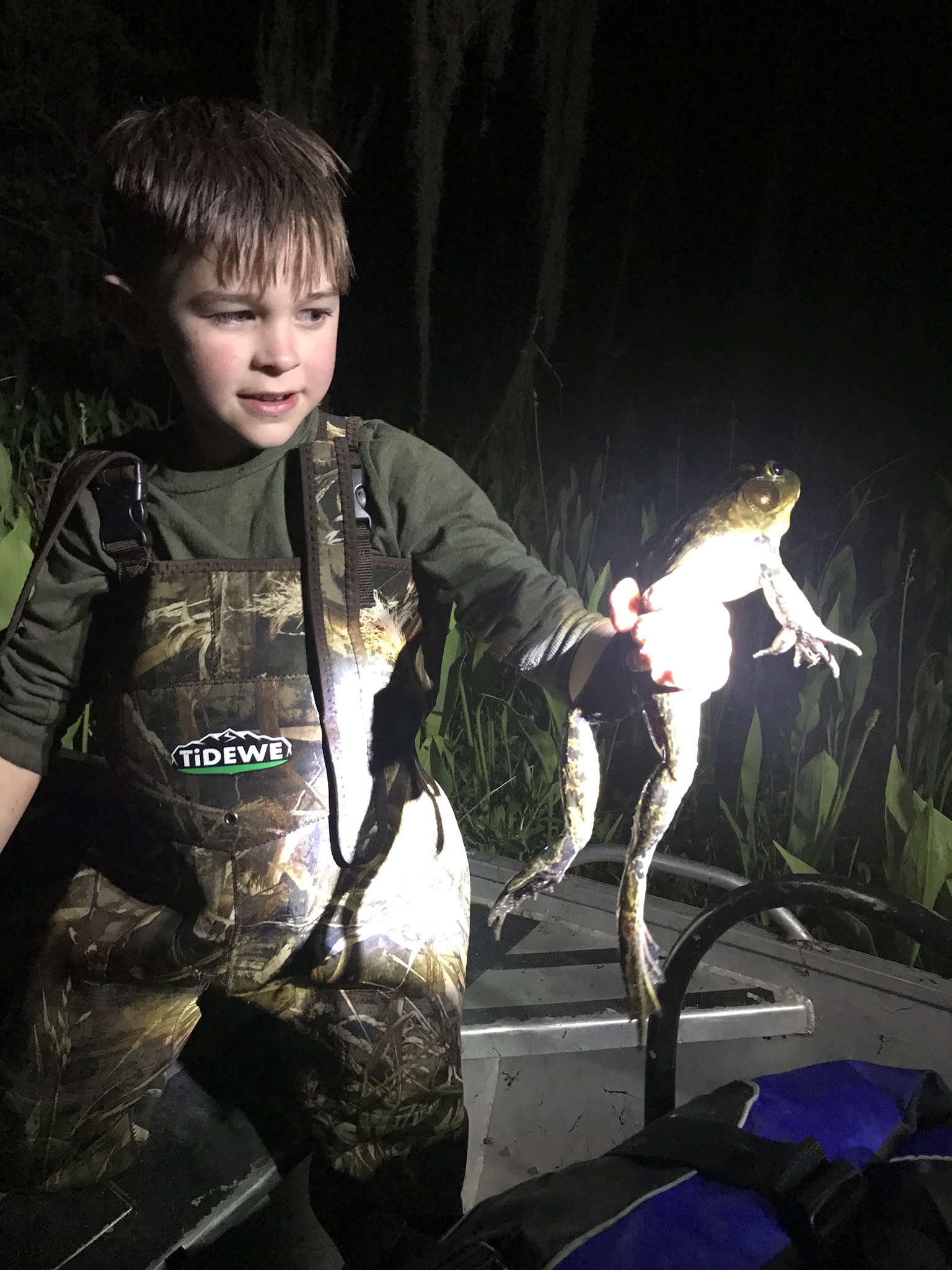 And I posted some bad info friday on bolt sizes...it’s corrected now 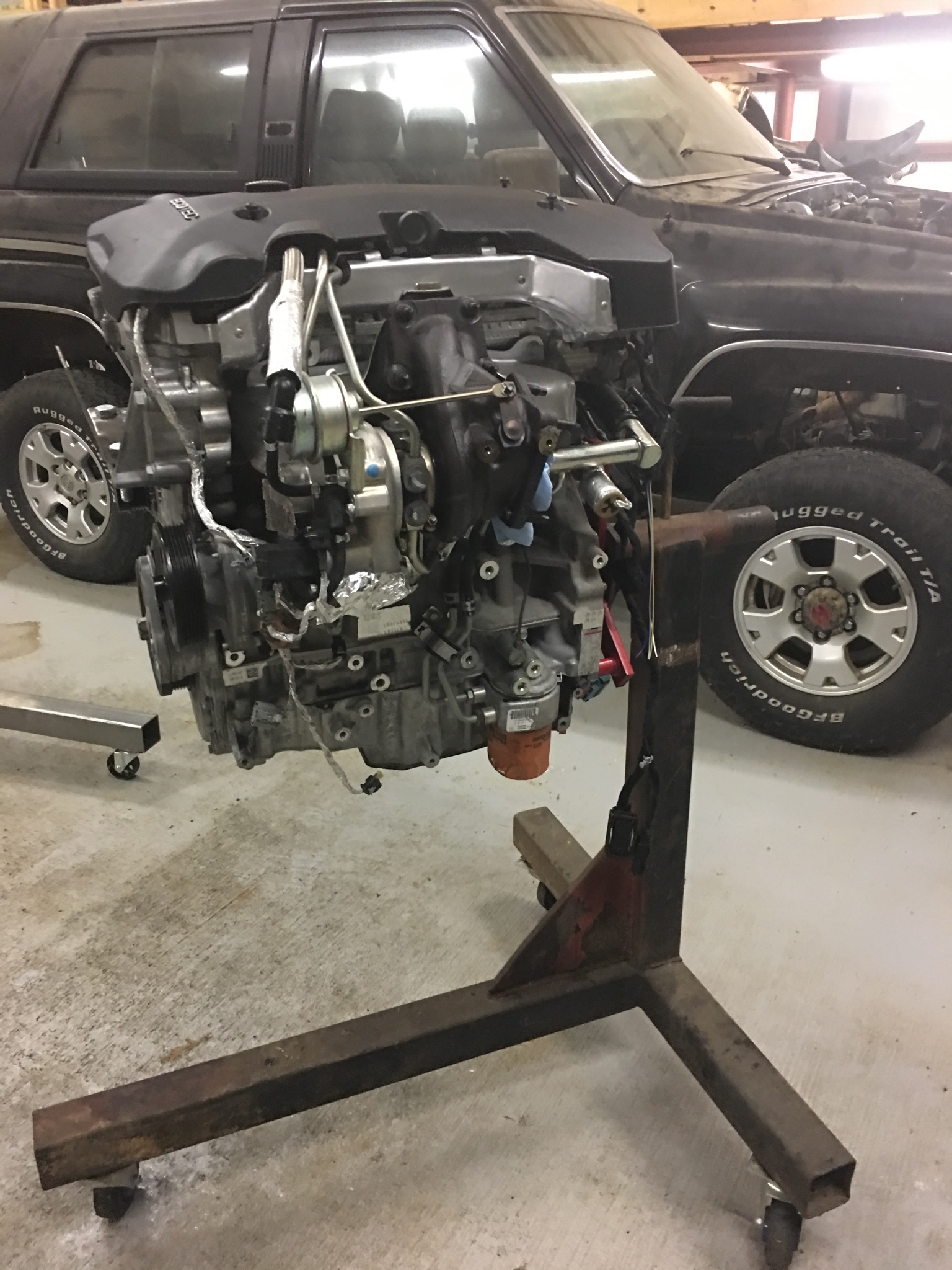 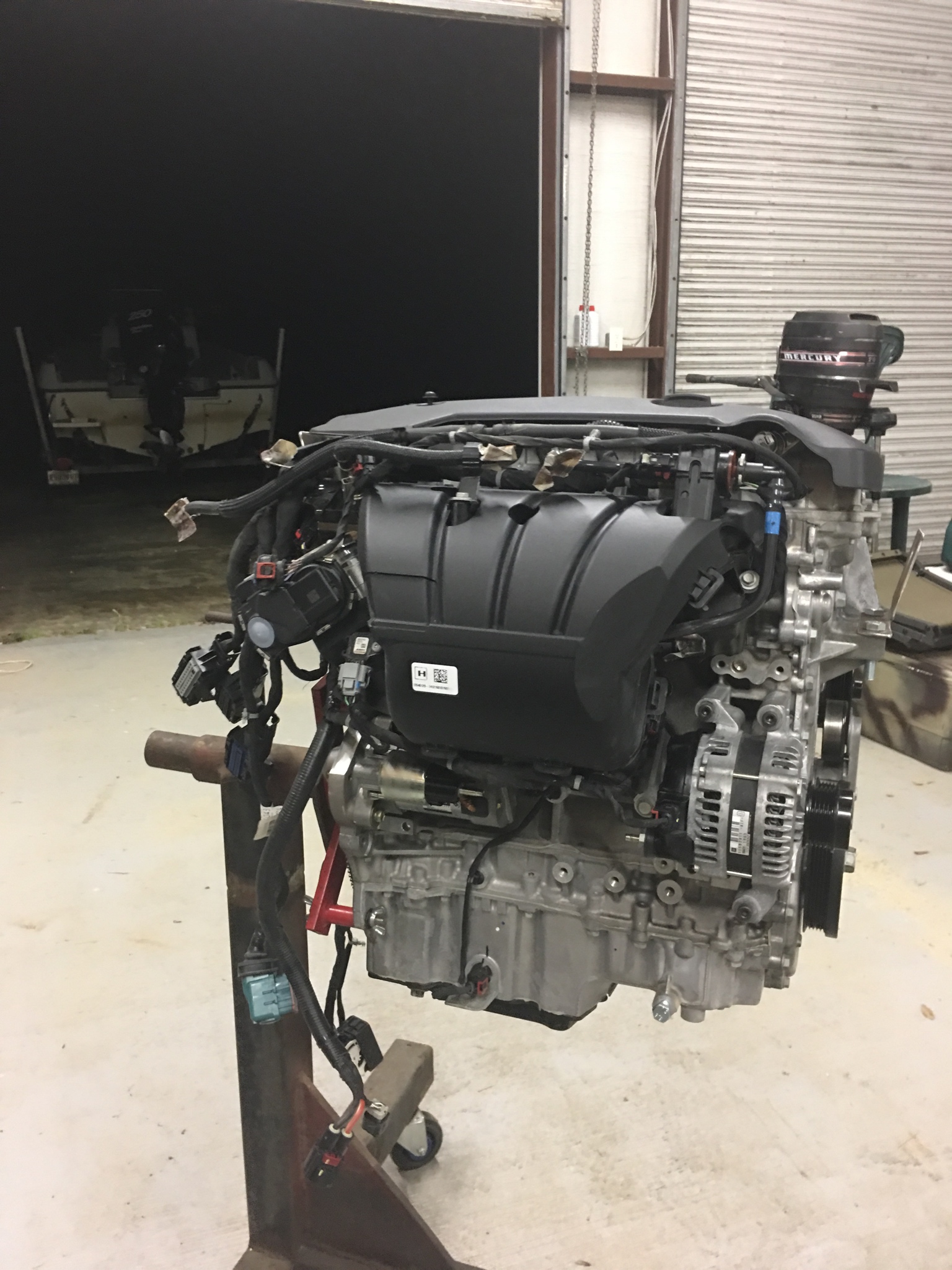 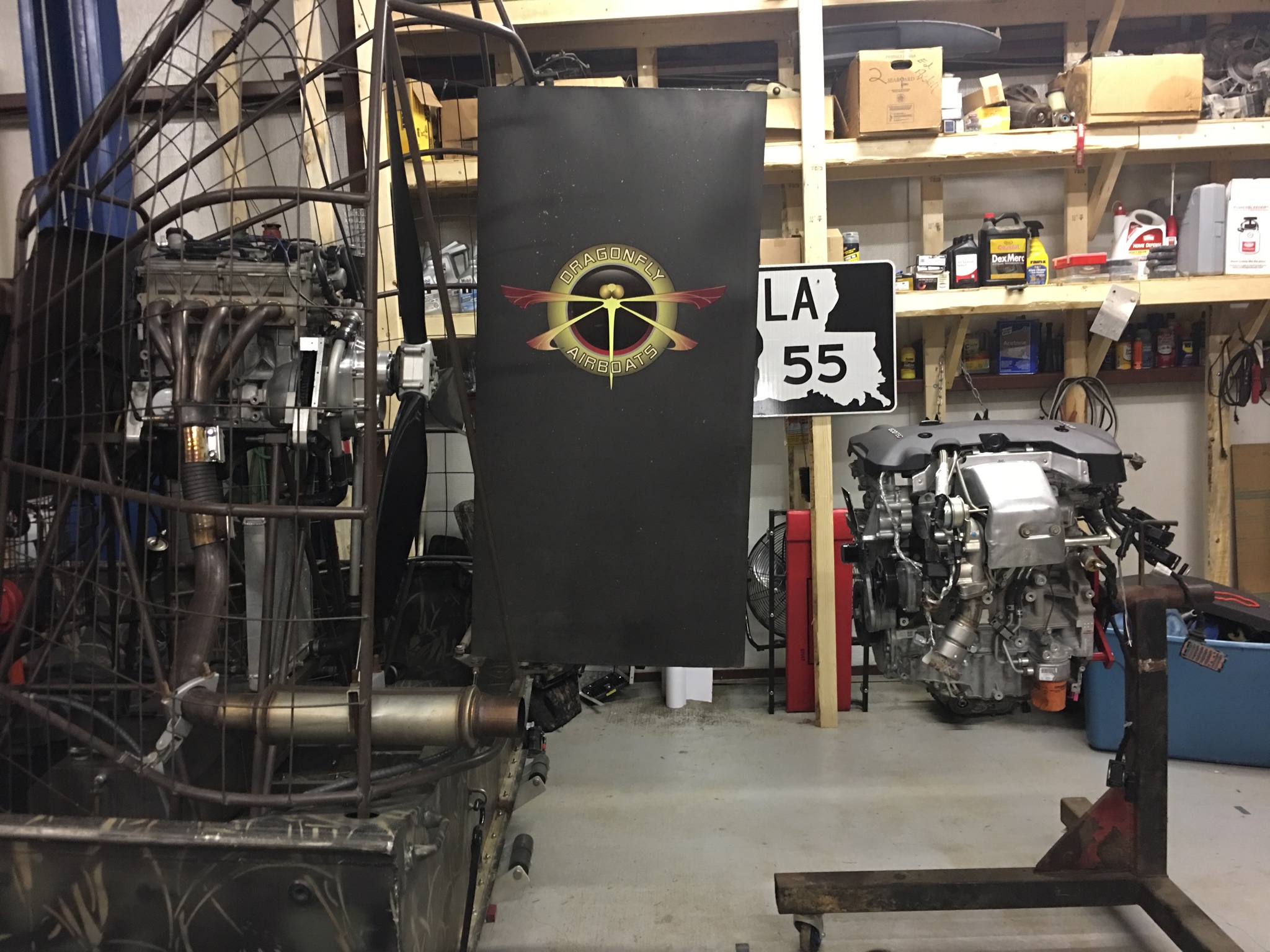 This belt routing would not allow the tensioner to work correctly but would not rub anywhere. If I could find the correct length belt I might be able to get it on and have it work properly. Or I could modify the alternator to work as the tensioner..............or just run a AC compressor. AC would be nice in the summer months. 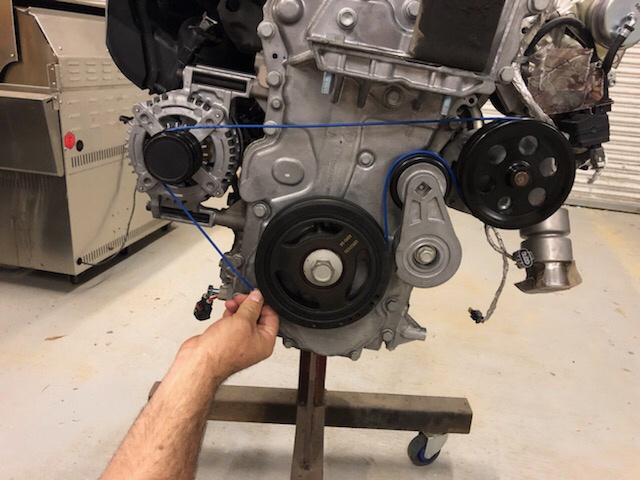 Starting on my motor mounts. I don’t think they are all
the same but what would be an approximate or average offset from centerline of crank to centerline of the prop shaft for a gearbox.....ox box, stinger, rotator, ballistic.... and no I don’t know yet what box I’m going to end up with. At this point it looks like I will be making an adapter so the good news is I can use any of them.
Top

I have a set of LTG front motor mounts ill give you so you can make patterns with them.